Auditor skrev:
I rest my case.
Klikk for å utvide...

As most Dynaudio fans will know, the Chinese company Goerterk bought over Dynaudio in 2014 and there have been worries about how this will affect Dynaudio. Like Volvo, another Scandinavian company bought over by the Chinese, it has been largely beneficial. Yes they now make drivers and other components overseas now in their parent company's facilities and cabinets are also brought in from elsewhere. 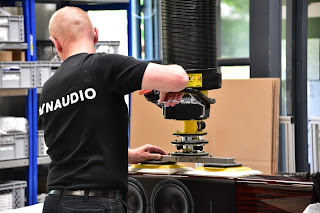 Apart from their facility in Skanderborg, they also have cabinets done in Latvia and some of their custom install series drivers are made in their parent company's plant in China. Their new award winning Music system is also made in China. Given the production standards that can be achieved there, it may be a sign of the times but most of their main home and car audio drivers are still made in Skanderborg. This is something that has happened to many other speaker companies. Roland is quick to assure that this won't affect the quality of their product and that reputation for dedication to quality sound is not something they want to sell out on. This is also why they won't simply slap their logo on OEM products like cheap headphones or Bluetooth speakers just to make a quick buck.
This is reassuring as they realize it will be folly to simply transfer their manufacturing wholesale overseas as Danish cabinetry is as much a part of their tradition as is in house driver production.
Klikk for å utvide...